Do you know proper doorbell etiquette? I had solicitors at my door the other night. It was 8:30pm. The kids had finally drifted off to dream land and I was ready to relax and quietly watch some television.

Instead, I decided that perhaps cleaning my toilet was more important than TV, so I was arm deep in the throne when it happened. The doorbell rang twice, not the ding dong of a normal person ringing my doorbell, more like ding a donga ding a donga. In a panic, I tried to rip my rubber gloves off but they were just stuck. The doorbell rang again. I proceeded to attempt to rush out of the bathroom but realized I had locked the door so the kids couldn’t come in while I was cleaning the toilet, and my gloves, that had decided they were all of a sudden my second skin, were too damn slippery to open the freaking door. Someone knocked loudly. I could hear it through the bathroom and my children’s bedrooms are right across from it. I was panicking. PLEASE DON’T WAKE UP MY KIDS, I screamed internally. The dog was pacing around, she hadn’t barked yet, but it was only a matter of time before she put on her “protection pants” and started warning me that there was someone that didn’t get the message the first time when I didn’t answer, incessantly trying to get my attention at the front door. 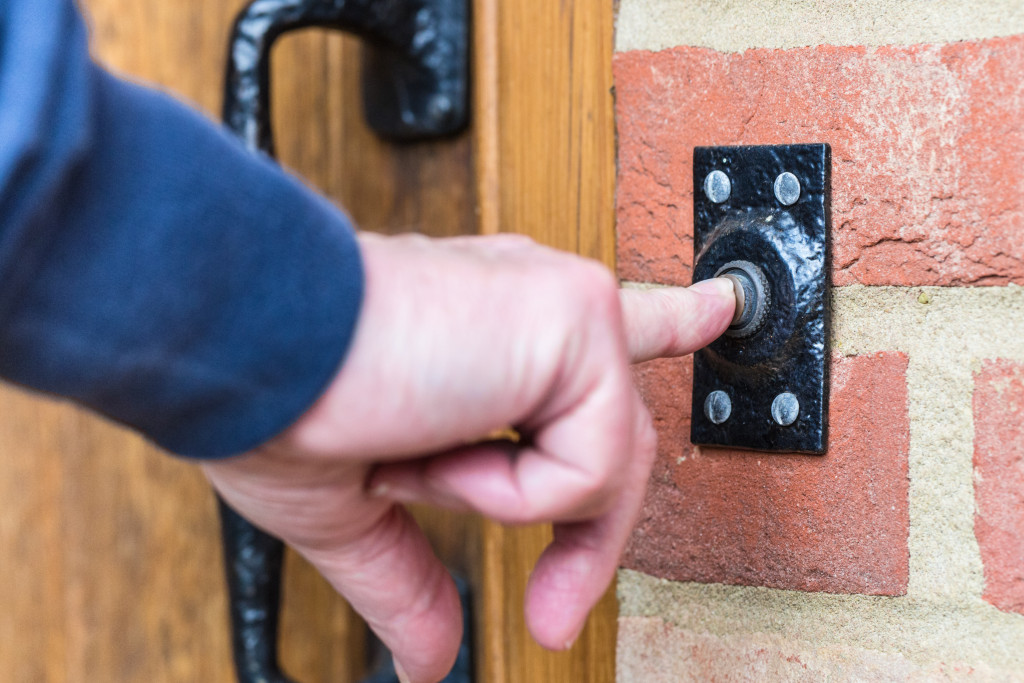 I finally got the gloves off my hands, washed them and dried off the bathroom door knob. I emerged from the bathroom to see who was at the door. I was hoping something bad hadn’t happened. I open the door and there is no one there. I look at my neighbours house and there were 3 people at her door doing the same thing!

I was mad. I said: “excuse me, were you just at my door?” “Oh yes,” one of the men replied, “we were just coming to talk to you about your furnace…” I didn’t hear anything he said after that, because I swear I was furious. I politely asked them what in the world they were doing going door to door at 8:30pm on a weeknight, to which they had no response. I then added: “Next time, press the doorbell once and if no one answers, chances are they are busy. Have a nice night” and stomped my way back into the house. (Quietly so as not to wake the children… THINK OF THE CHILDREN!”)

Follow proper doorbell etiquette, unless you are on fire or in some other kind of danger, don’t knock or ring my doorbell after 7pm. I will help if you need it..  I am here for those who need assistance, I am not an amber alert complainer but if you are selling something or trying to scam me… DO NOT DO IT. I might be cleaning my toilet.