On a Sunday night in 2016 around 9:30pm EST the OPP used the new and enhanced Amber Alert program for the first time. The alert sounded a loud, repetitive alarm that disrupted the sound on Television shows, to alert viewers about a missing boy through a large pop up on the screen.

The police were trying to find a young boy that people had called in and reported as forced into a minivan. It turned out that the young boy was actually picked up by his parents after they said that he had run away. The boy from 2016, ended up safe! So that’s a positive and happy story right? But not all of them are, this time it was different. This time the young girl went missing and was found hours later deceased.

Now that the new and enhanced Amber Alert includes cell phone notifications, people are STILL, 3 years later… COMPLAINING. A life was lost this time and even being aware of that, some of you are still complaining about losing sleep? ARE YOU JOKING?

I mean, I was impressed with the Amber Alert. It was to the point! If they had something like this years ago, maybe more lives could have been saved. You never know. I was just so happy that there is a system like this in place to keep people… children safe. Wouldn’t anyone feel that way?

You’d think so. You’d think that those who had their Television programming or even their sleep interrupted for what was a brief moment in time, would be pleased that people are doing everything they can to protect a child. Some were… but many, many were not. Many even took to social media to complain. Some people even called the police to complain. The POLICE. They wasted valuable police time calling 911 to complain about an alert on their TV and then again this year for the one on their phone!

*Screenshot of comment from 2016 about Amber Alert where the boy was found. 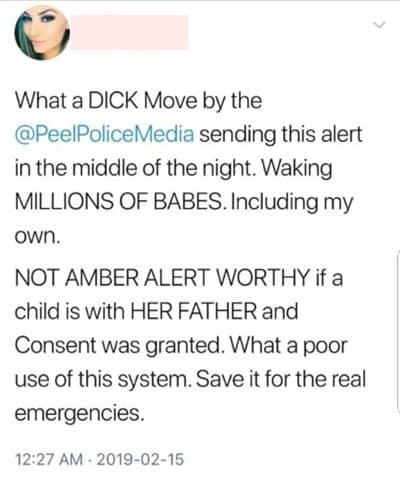 I would like to express my utter disgust with those who have complained or were complaining. Like the people above. So I am going to. Now.

I would like to start by saying that although you may not be located anywhere near where the Amber Alert is being released,  people move fast and if this were a child abduction, it’s important to spread the word as quickly as possible to other places. Alerting the public to keep an eye out for someone’s son or daughter… their child is not an inconvenience but a blessing.

How is it that you can sit there and complain that your television show or sleep was interrupted when someone could be missing their child? How can you possibly be so damn selfish that the noise of that interruption might have woken up your sleeping children and so you complain? You do know that your children are sleeping, safely in their beds while someone else’s child may be scared, alone or being abused right? Which ended up being the case when this twitter user inferred it wasn’t a real emergency. DISGUSTING PEOPLE.

What if it Were Your Child?

What if this was your child? Would you complain about the alert then? If no one did anything about it, if no one broadcast an alert, would you then say that enough was not being done? Of course you would, because you would (or so I hope) want to move heaven and earth to find your child safely. You would want nothing more than for your child to be ok, and located and brought back home! If having your child home safely meant that you had to miss 2 minuets, heck even 20 minuets of your favourite TV show or be woken up at midnight, I am positive that is a price you are willing to pay. It’s a price I am willing to pay for your children’s safety. It’s a price MANY would be willing to pay for the safety of YOUR children. Why? Because a Television show will come on again. There are repeats, There are plenty of places online to stream TV, and some TV’s even have a fancy PVR where can record the same TV Show later down the road. Your TV show is replaceable SO IS YOUR SLEEP. CHILDREN are NOT.

Stop Complaining and Count Your Blessings..

I keep seeing all these complaints from people on social media, saying: “Oh the alert was so loud it scared me and woke up my children..” Good. The Alert gave you an extra chance to give your Children an additional hug that night, it allowed you to hold them tight, and hopefully, these alerts will give that same chance to those whose children are missing, by potentially bringing them home.

“Why do I have to see it? I live in a different province or city?” BECAUSE. Because, people travel fast. Notifying a large volume of people all at once is a great way to help, to get someone to notice and call in if they see anything suspicious. It could save a life.

I am beyond willing to give up parts of a TV show or sleep if I have to, to ensure other people’s children are safe and to know that this Amber Alert system would be in place if my family ever needed it.

Those of you complaining should be absolutely ashamed of yourselves. There is no excuse for that kind of behavior. Where is your sense of compassion? Where the hell are your priorities?

When I see things like this, I start losing faith in humanity!

Who the heck are we as a generation, community, and people… that we can’t give up a little bit of a TV show or a tiny bit of shut-eye to possibly save someone’s life?

We need a change. Everyone that complained, you are all horrible and disgusting.

What did you think of the Amber Alert interrupting your TV or going off on your cellphone?