Children need schedules. I stick by this vehemently. I have been raising my Children with schedules since the day they were born. Of course when they were babies, the schedules were a little less strict, as babies kind of decide when they want to eat, when they want to sleep and when they are going to poop themselves. However, even so, we started putting a structure in place and by the time they were 6 months old, my children were on a schedule that focused mostly around bedtime routines and nap times. Bedtime was 7:30pm and that was not up for discussion.

My Children need schedules because they thrive that way. 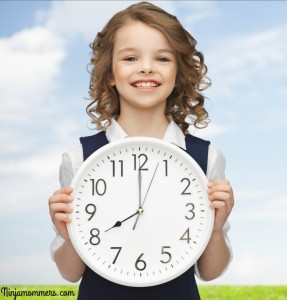 When children get used to a certain schedule and routine, they know what to expect and when. This is a great way to eliminate arguments and frustration on both the parents and the Children. For example; My kids know that they have to have their teeth brushed at 7pm to be in bed by 7:30pm. Since we have a bedtime routine, the kids know it goes Bath, Pajamas, Teeth brushed and faces washed before we get our story time. It’s predictable, so they know what comes next. It’s come to the point now that I don’t have to ask them to do these things, they just do them.

Even though your children are on a schedule that you facilitate, schedules can help your Children to feel a little more independent. When your Children know what to expect, they don’t have to be reminded to do things such as pack their backpacks, get dressed in the morning and even clean their rooms. This helps them to take charge and do what is expected of them without being reminded. Your Children will feel much more independent and grown up that they are taking care of these small tasks without having to be told to by their parents.

Having a schedule and routine in place can help reduce power struggles, time delays and just general chaos. My Children need schedules, and so do I as a parent.

Do your Children Need Schedules?