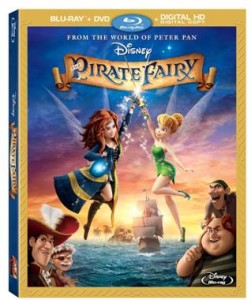 We are so excited to tell you that you can buy Disney’s The Pirate Fairy on Blu-Ray come April 1st!

As you probably already know, we are Disney movie fanatics! Baby Girl Loves Tinkerbell and the fairies so when I saw that this was coming to Blu-Ray I was so excited to share it with her.

We have already watched it a total of two times and we just received our copy yesterday! Baby Girl loves Zarina. Zarina is a wild child fairy who just can’t seem to cap her fascination with blue pixie dust, and with that fascination comes trouble. When Zarina chooses to leave her home at Pixie Hollow and join forces with the conniving Skull Rock Pirates, she finds herself in more trouble than she can handle. The fairies of Pixie Hollow embark on an epic adventure to find and help Zarina and save Pixie Hollow from the band of pirates. The cabin boy, James (who will soon after become Captain Hook himself) goes head to head with the fairies in a battle of epic proportions! This movie is filled with adventure and laughter and is not to be missed.

Baby Girl loves the songs in the movie, she is always quite enthralled with the soundtracks and The Pirate Fairy didn’t disappoint.

The story line was well thought out, and action packed! I couldn’t bring myself to walk away for a second.

We also quite enjoyed the bonus features included on the Blu-Ray. SECOND STAR TO THE RIGHT: THE LEGACY OF NEVER LAND delves into the history behind the movie, giving you a behind the scenes look at what inspired the creation of The Pirate Fairy. There are also numerous deleted scenes, and some awesome sing-alongs!

Get Your Copy On Blu-Ray Combo Pack on April 1st and Join Tinkerbell, Zarnia and all Their Friends on an Epic Adventure!

Enter now for your chance to win Disney’s The Pirate Fairy on Blu-Ray Combo Pack! Open to CANADA ONLY (excl. Quebec) All entries will be verified. Winner will have 48 Hours to Respond when chosen.

Disclosure: All opinions are of Ninja Mommers’ own and not influenced in anyway. Ninja Mommers received a copy of The Pirate Fairy to complete this review.