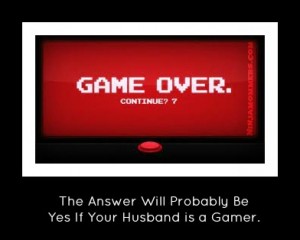 Hi There and Welcome to Wives Married to Video Gamers anonymous. If you have found us because you have been searching about being a wife married to a gamer.. it’s nice to see you. If you have been here before, welcome back! It’s been over a year since the the last time I wrote on the subject and I think it’s time for another “meeting, Pow-wow or get-together” if you will.

If you are wondering if you truly belong here or if you fit my definition of someone that is married to a gamer, there are really only a few simple things you need to ask yourself in order to find out if you or your significant other fit the bill. These things are listed in my initial post, however I will give you a breakdown.

1. Have you ever considered dressing up in one of the game characters costumes just to get your significant other to “push your buttons” for once?

2. Have you had vivid dreams about “accidentally” spilling an entire jug of juice on the game console?

3. When your significant other plays video games, do you ever feel as though anything you say is to the wall?

4. Have you ever spoken to the wall, because you get more of a response from it than you do your significant other?

Again, if you answered yes to any of these questions than you either are here for all the right reasons, or you should still be here if you were already here in the first place…

You are NOT alone. There have been many time I have fantasized about the day that the game console meets grim death, most of these fantasies include me wielding an axe and shouting “Die you electronic hussy, DIE!” Yes, this is extreme, but after dealing with this intruder in my marriage and daily life for the last 7 years I really could do without it. In fact, I would be quite satisfied with playing a part in it’s demise.

So I think the real question here is: “How do you cope?”

How I deal with being Married to a Gamer

1. I sit beside him and picture all the characters in the game in pretty pink tutus. Seriously. Try this. It’s rather hilarious and when you shoot pop out of your nose from laughing so hard… he won’t even notice because he’s too busy focusing on his game.

2. Be as annoying as possible. No seriously. Do it. I take great joy in trying to distract him from his game. I don’t care if he gets all grumpy about it either, because if he gets too grumpy, he stomps off in a huff, leaving me alone with the TV.

3. My favorite thing to do is ignore him back. Seriously! When he isn’t gaming, I will pretend to be engrossed in a book. When he talks to me I won’t even flinch. I can hold this pose for an hour. I call it: “Gaming Statue.” He hates it. It makes me giggle. He knows what I am doing. The next time he games, he tries to pay more attention to what I am saying.

I am currently, at this very moment, trying to refrain from throwing hubby’s playstation out the window…. It’s hard not to since he’s at work and I could easily just pretend it disappeared. I have a feeling that he would know what I did though and then I’d have to hear about it… not only that but I’d have to throw out the tablet, his phone, the playstation and hide my laptop and quite frankly I do not want to put that kind of effort into video games…. That’s clearly his job.

How do you cope?

5 thoughts on “Wives Married to Video Gamers Anonymous- Too Much Video Games, How to Cope”