Is there even a point to arguing with Toddlers? Have you ever tried arguing with a 3 ft tall drunk leprechaun? 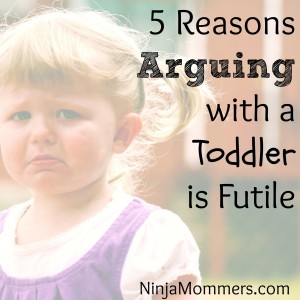 I have in fact, compared an exhausted toddler to a drunk leprechaun before. I stand by that comparison. Especially since I have had two of them throughout the years.

Arguing with Toddlers is futile. I promise you.

5 Reasons Arguing with Toddlers is Futile

This pretty much sums it up.. in a nutshell.

2. They Tune You Out

Toddlers hear you start to argue and they either argue back or completely tune you out. Even the dirt is more interesting than what you have to say at this point.

There is no reasoning with a tired 2 year old. There isn’t. They are just the most unreasonable people on the face of the planet! It’s very comparable to trying to nail pudding to a tree to be honest. If you expect a 2 year old to have a reasonable debate about the benefits of wearing mittens when it’s freezing outside, then you are as bad as the pudding.

You’re the parent! Do you really think it’s beneficial to argue with some snot nosed little monster (I mean, beautiful angel) that JUST learned how to talk!? No. It’s NOT beneficial. Arguing with Toddlers is ridiculous. You must not forget, you are the parent! What you say goes.

Have you ever argued with your Toddler?

25 thoughts on “5 Reasons Arguing With Toddlers is Futile”