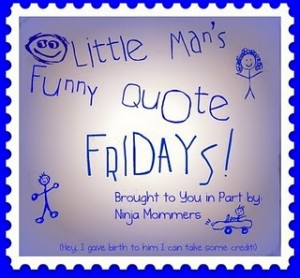 Speaking of Funny Kids Quotes, Little Man has some very interesting view points on money and the way it works. He has always had interesting outlooks on very real world situations. Most of them make me giggle.

The other day Little Man asked me if he could have something he saw on TV, and I explained to him that he would have to earn it as it costs lots of money. Little Man knows this. We have spoken about it a few times before.

Little man said ok, and quietly went back to watching the rest of his program.

In fact, he likes to earn money. He loves to do chores and he quite enjoys being able to say that HE purchased what he wanted by saving up and working for it. To me that is a great thing. Work ethic is very important to me and husband as we want Little Man to know the value of a dollar.

The show ended a few minuets later, and I heard Little Man sigh. When I asked him what was wrong he just looked at me. He seemed as though he had been contemplating something for quite some time. All of a sudden he burst out with:

“You know what Mommy!? I like earning money to buy things, but I REALLY DO NOT like how much things costs. Maybe you should call santa and tell him to make things not cost so much.”

I started laughing and explained that Santa doesn’t make the prices. Little Man looked offended and said I KNOW MOMMY I was JUST being silly.

It has officially happened, I am too old to get my son’s jokes.

DO you know Little Man? DO YOU really?

Either way, I will get on that phone call soon, maybe Santa can lower taxes and Hydro costs while he’s at it.