The Frozen Sing-Along Edition is great! Especially for the Frozen Lover on your List this year! Who doesn’t LOVE Singing along with Frozen? I know we do. You can too! Check out what’s new from Disney! 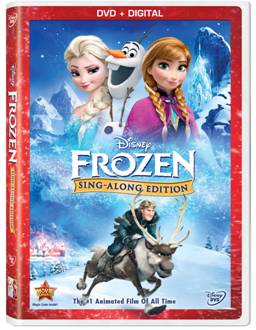 Experience Frozen, the hit musical comedy from Walt Disney Animation Studios, like never before in a new to DVD, full-length Sing-Along Edition! Follow the lyrics with a bouncing Frozen snowflake. Join Anna as she sets off on an epic journey – teaming up with rugged mountain man Kristoff and a snowman named Olaf – to find her sister Elsa, whose icy powers have trapped the kingdom of Arendelle in eternal winter. It’s pure enchantment – and full of fun for the whole family!

Why We Love The Frozen Sing-Along Edition

Baby Girl LOVES the Frozen Sing-Along Edition! Little Man does too! Baby girl can’t read yet but she still enjoys following along with what she “thinks” she’s reading. Little Man enjoys reading the lyrics on the screen. He loves that he can read them correctly! He has actually made a game out of it. Each time we listen he challenges himself to get more right! It’s really cute. I like that I  can also participate. The kids really love the songs. It’s nice to know the correct lyrics to the songs my kids love. We especially love “Do you want to Build a Snowman?” We sing it every time it snows.

The Frozen Sing-Along Edition comes in a one disc set. The set includes the theatrical version as well as the sing-along edition. You can also choose in the Special Features to play only the songs continuously! That way you don’t have to watch the entire movie to enjoy the sing-along feature.

In the Special Features you can also get to know what inspired the creation of Disney’s Frozen. Just watch “Breaking the Ice” to learn more.

There is also a short Mickey Mouse Movie called “Get a Horse”. Another Mickey Short for everyone to enjoy!

We Love Disney’s Frozen. The Disney Frozen Sing-Along Edition too! We really enjoyed signing along and bet you will too!