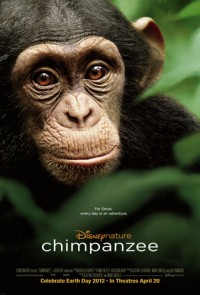 On April 20th, just in time for Earth Day,Disneynature is taking movie goers deep into the forests of Africa with the release of CHIMPANZEE, a new true-life adventure that introduces us to the adorable young chimp named Oscar and his chimpanzee family. Featuring Disneynature’s signature breathtaking, never-before-seen footage, CHIMPANZEE showcases the intelligence and ingenuity of some of the most extraordinary personalities in the animal kingdom.

In celebration of the film’s release, Disneynature has joined forces with the Jane Goodall Institute of Canada for See CHIMPANZEE, Save Chimpanzees program where for every movie goer who sees the film on opening week, a donation will be made to JGI Canada to help protect chimpanzees and their habitats, now and into the future.

In the spirit of the film, and to further do their part to help protect these amazing animals, Disneynature is launching a “Like”  Us, Save Chimps program on their Walt Disney Studios Canada Facebook page today and they NEED and WANT your help!

If they are able to reach 22,000 likes on their Facebook page (facebook.com/WaltDisneyStudiosCanada) by Sunday, April 22nd “ which is Earth Day, they will adopt two orphaned chimpanzees through the Jane Goodall Institute of Canada’s Chimp Guardian Program. The two certificates of adoption will later be shared with fans on their Facebook wall.

Now.. Guess What!? The fantastic people at Disney have provided me with 1 family pass good for a family of 4 to go see the CHIMPANZEE Advance Screening!

Hurry and enter below for your chance to win these great passes via the Rafflecopter Form!

AND… For more chances to Win For The Toronto Screening of CHIMPANZEE; Check Out My Friends… Whispered Inspirations Tales of a Ranting Ginger and enter with them as well!